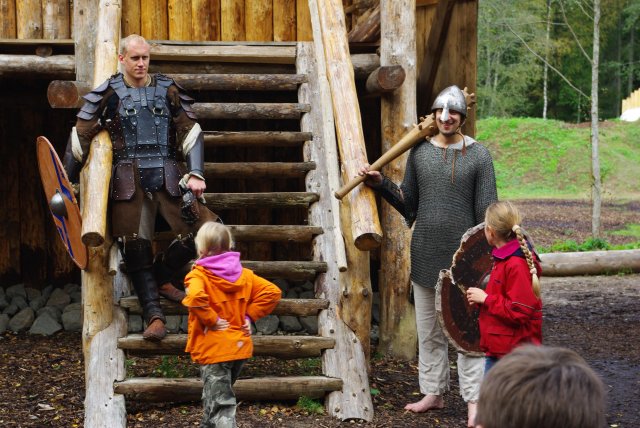 Step back in time and get a feeling of what life was like during the 11th century Viking Age in Estonia.
This ancient village is constantly upgraded and has everything that a Viking might need:

The Viking Village Experience in a beautiful natural surrounding is waiting for you. You can partake in traditional Viking activities that are captivating both young and old.

Viking Village visit is a trip full of simple and pleasant entertainment. If you prefer relaxing in the natural surroundings full of ancient atmosphere and encouraging energy of the old Viking warriors, then you will certainly enjoy your day here.

The Estonian people have lived in these lands since ancient times and ancient Estonians were known as a wise and mysterious people. They have been described as a nation of witches and sorcerers, and for good reason. While later periods of Estonian history can be learned about in a number of places across the country, the Viking Age (8th to 11th century) in our lands has not received much attention.

The Viking Village is the result of one man’s long-lived dream and the boldness and initiative of young enthusiasts. It all started in 2005, when the current chieftains of the Viking Village discovered an ancient and mysterious location on the scenic bank of the Pirita River, which could not have been a better place to build an ancient Estonian Viking village.

The mission of the Viking Village is to give people a sense of what ancient life was like and to provide a place to relax and learn to know themselves as well as their environment. It is a place where you can take a break from fast-paced modern life and discover the Viking within yourself. The Viking Village is constantly being expanded and improved. Today, we have completed roughly half of the planned village, which means that there is at least as much to come!

Also you can discover the Viking in you by trying fun Viking games in this exceptional environment. Those simple activities including archery and ax throwing are sufficiently challenging to capture you fully and make everyone smile. After the days activities you can relax and enjoy the tasty meal in the cozy local tavern.

Tallinn ghost tour will give you an opportunity to brush shoulders with spirits in the legendary Virgin Tower, a medieval prison and haunted streets of once peasant lower town, where ...
END_OF_DOCUMENT_TOKEN_TO_BE_REPLACED
Most Popular

The tour will also warm your heart with authentic legends. The haunted streets, Tallinn’s own mummy and Don Juan have stories to tell… Step back ...
END_OF_DOCUMENT_TOKEN_TO_BE_REPLACED
New

This tour will first take you to discover the underground Bastion passages. The old tower Kiek in the Kök is guarding the old passages of ...
END_OF_DOCUMENT_TOKEN_TO_BE_REPLACED
New

See the most interesting and significant sites of Lower Old Town, including the oldest continuously functioning pharmacies in the world, Town Council Pharmacy, the Great ...
END_OF_DOCUMENT_TOKEN_TO_BE_REPLACED