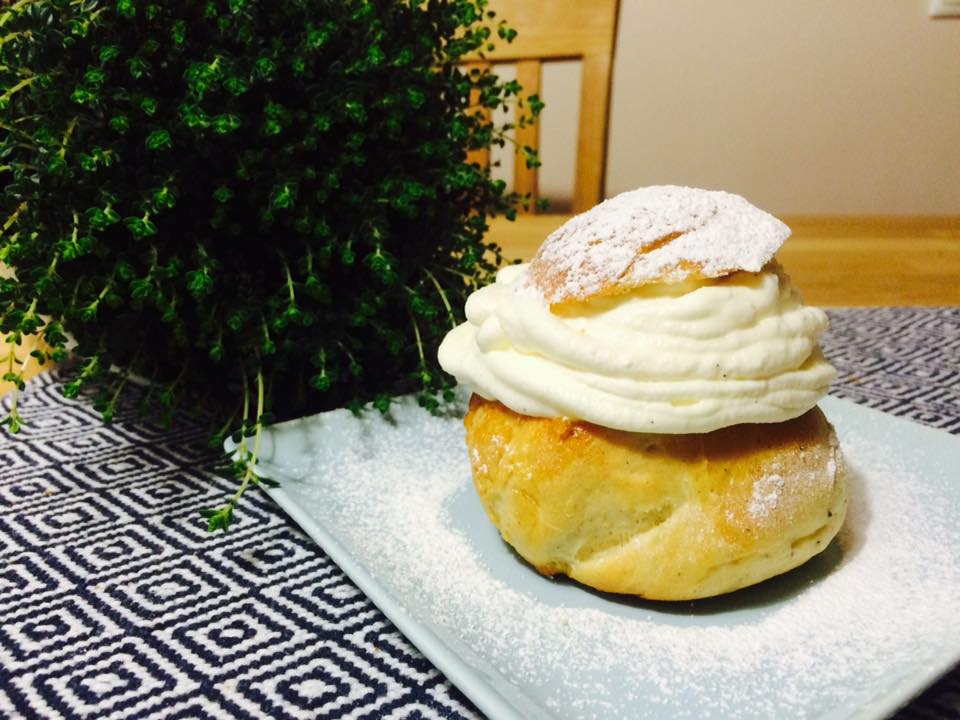 Known in the United Kingdom, Ireland, Australia and Canada as “Pancake Tuesday”, Estonians celebrate Shrove Tuesday or Vastlapäev instead – and tons of buns with whipped cream are consumed.

The Day before Lent* (40 day period of fasting and repenting, originating from Christianity) is internationally known as Shrove Tuesday across the world. It is called “Mardi Gras” in France, “laskiainen” in Finland, “Carnaval” in the Netherlands, “Vastlapäev” in Estonia, “Fettisdagen” in Sweden, and “Fastelavn” in Denmark.

Traditionally speaking, this is the day before the big fast, so naturally in most countries it revolves around food as it is the last day before Easter when certain items are allowed to be eaten.

Most of the world knows this day as Pancake Day and simply enjoys eating pancakes. But what do the people of Denmark, Sweden, Norway, Finland and Estonia do? They stuff their faces with whipped cream and/or jam & almondpaste filled buns, go sledding, eat copious amounts of pea soup, flog their parents with a bunch twigs (true story!) or beat a wooden barrel filled with candy (and in the past: a cat!) until the candy pours out.

Fettisdagen is what Shrove Tuesday is known as in Sweden, direct translation of it would be “Fat Tuesday”. In addition to this, Swedes have a few other names for the day, all of them obviously referring to the amount and type of food to be consumed on the day – pork Tuesday, butter Tuesday and white Tuesday for example. What better way to refer to a day dedicated to fattening up before the big fast?

The most important part of Fettisdagen in Sweden are the Semla Buns – a delicious cardamom flavoured bun, filled with whipped cream and almond paste (a bit like marzipan). Originally Semlor (plural of Semla) were only meant to be eaten on Shrove Tuesday, but in the past years they have become more and more popular and they are eaten pretty much the entire time from Christmas to Easter. And given that they are almost the best thing in the world, why shouldn’t they?

A popular urban legend claims that Adolf Frederick, the King of Sweden died in 1771 after having consumed 14 servings of his favorite dessert: semla stuffed with almond paste and served in a bowl of hot milk.

Though Estonians and Finns have their owns versions of the Swedish Semlor, there are other traditions that are held in just as high regard as the flavorsome white bun.

In these countries the traditions surrounding Shrove Tuesday are believed to predate Christian influences. It is a day of fun and celebration for kids and grown ups alike – a day filled with activities for children and enormous amounts of fatty and calorie-rich foods for the grown-ups.

Vastlapäev (Estonian) and Laskiainen (Finnish) are celebrations when children would go sledding or downhill sliding to determine how the crop would yield in the coming year. Those who slid the farthest were going to get the best crop. In Estonia, most schools will not hold classes and will instead organise an action-packed day of outdoor activities – sledding, skiing, ice skating, snow sculpture competitions, DIY sled races or just team games held in the snow. All of this is usually followed by eating vastlakukkel (the good old bun!) and drinking hot tea. In Finland, very similar activities are held.

In both countries, pea soup is held in high regard. What is not held in such high regard is the result that comes after the entire family has been eating pea soup all day. Why?

Now multiply the smell by the number of people in your family eating pea soup. Didn’t think this through, did you? Hehe, better luck next year!

In Denmark and Norway the celebration is known as Fastelavn and is also marked by eating the ever-so-famous white bun, known as fastelavnsboller (usually covered with icing and sometimes filled with whipped cream.) But in addition to eating fastelavnsboller, several other customs are followed this time of the year.

In Denmark, some towns are renowned for their elaborate Fastelavn festivities and parades. One of the traditional events is called slå katten af tønden (“hit the cat out of the barrel”) – the entire concept being quite similar to a Mexican piñata.

Another popular custom is the Fastelavnsris – Norwegians have an old belief that birch twigs that hadn’t yet grown leaves would bring fertility to a person or a household.

Everything and everyone from farm fields and animals to young girls and childless couples were gently flogged with the birch twigs to make them fertile.

And even the kids were allowed to flog their parents in the morning to wake them up. Twigs with new buds on them were also used to decorate the house, sometimes with added decorations such as feathers, egg-shells, candy and little figures of babies.

*Lent is a season of forty days, which begins on Ash Wednesday and ends on Holy Saturday. The forty days represents the time Jesus spent in the wilderness, enduring the temptation of Satan and preparing to begin his ministry. Lent is a time of repentance, fasting and preparation for the coming of Easter. It is a time of self-examination and reflection.

Enter into interesting discussion with your local guide about everyday life and customs of Estonian people and learn about their fascinating history. Tallinn’s old ...
END_OF_DOCUMENT_TOKEN_TO_BE_REPLACED
Most Popular

The tour will also warm your heart with authentic legends. The haunted streets, Tallinn’s own mummy and Don Juan have stories to tell… Step back ...
END_OF_DOCUMENT_TOKEN_TO_BE_REPLACED
Most Popular

Tallinn ghost tour will give you an opportunity to brush shoulders with spirits in the legendary Virgin Tower, a medieval prison and haunted streets of once peasant lower town, where ...
END_OF_DOCUMENT_TOKEN_TO_BE_REPLACED
Most Popular

This focused, yet interactive tour gives one a good overview of the old town and the more significant sites in the city center. Your ...
END_OF_DOCUMENT_TOKEN_TO_BE_REPLACED