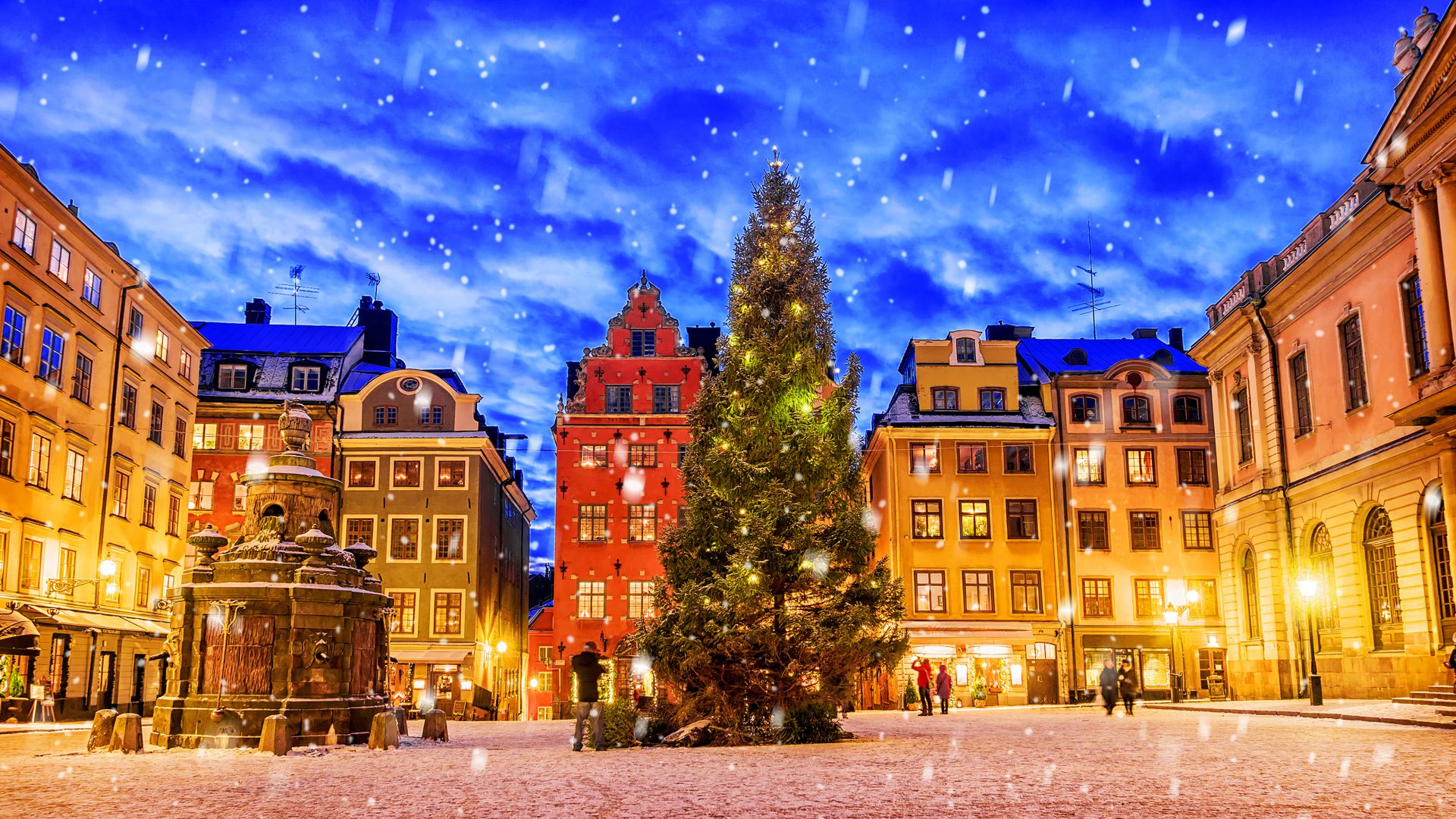 Discover the City in the Footsteps of Alfred Nobel

On December 10, the Nobel Prize banquet will be held bringing together scientists, politicians and illustrious personalities in the Golden Hall of the Stockholm City Hall with the aim of paying homage to the winners of the annual edition.

Although I doubt you are invited to the banquet you can get to know the city in the footsteps of Alfred Nobel and, if you dare and your pocket allows you, try the menus of the Nobel banquets of past editions. The restaurant Stadshuskällaren, located as its name suggests, in the City Hall’s cellar, prepares on demand the menus that guests of the Nobel Prizes ate on previous occasions. You should also visit the Nobel Museum at Stortorget square in Gamla Stan. The museum is included in the Stockholm Pass tourist card. You can also take a guided tour of the town hall and you will see the blue room where the banquet is held and the Golden Hall where the guests dance. In the Hötorget square you have the Konserthuset concert hall with a striking blue color. This is where the Nobel Prize ceremony takes place.

If you are in Stockholm (or anywhere else in Sweden) on December 13 you will realize that many processions of Lucia, the Queen of Light, are taking place all around you. Each city, town and school choose a girl who will act as a lady of light or Lucia dressed in white clothes and wearing a crown of candles on her head. In the procession you will also see damsels, star children and pixies waking at the back of the crowd while singing Christmas carols. Enjoy the hot spiced wine (glögg in Swedish), the lussekatter – a typical saffron buns – and pepparkakor – the famous Swedish gingerbread cookies that you probably already know. This tradition can be seen in churches, hospitals, schools or work centers throughout the country. Some places to attend in Stockholm in the days around December 13 are Storkyrkan, the Cathedral of Stockholm, the Hjorthagskyrkan and Kungholms Kyrka churches or in Skansen.

In Stockholm the two busiest Christmas markets are the one in Stortorget Square – in the heart of Gamla Stan – and Skansen’s Christmas Market. In both you can enjoy spiced wine, buy crafts and decorative elements, etc. In addition, you can try typical gastronomic specialties such as sausages made of reindeer or moose. The Christmas market in Skansen opens only Saturdays and Sundays from the first Sunday of Advent until Christmas Day. Gamla Stan Christmas market opens every day. Another interesting market is located in Rosendals trädgård on the island of Djurgården where you will find seasonal flowers, bread and traditional pastries and in mid-December a show of lights and colors called Vinterljus.

If you want alternative Christmas markets you can take a ferry and go to Utö, an island in the archipelago, (one hour from the center of Stockholm) or Sandhamn and enjoy the magnificent show that sailing out of Stockholm offers in winter especially if it turns out to be a white Christmas.

Back in the city you can also visit the Christmas markets organized by different design schools that usually take place during a particular weekend. One of them is the Christmas market at Beckmann Design School (Brahegatan 10 – near the Östermalmstorg metro stop) or the Design Christmas Market that changes its annual location and is celebrated during several weekends in December.

If you want something unique, go to Marsipanbåten, a boat at Strandvägen, 18 where you will find chocolate, marzipan and many other sugary delicacies to enjoy or give as a present.

Every year Stockholmsjul is responsible for decorating the city with thousands of light bulbs that light up the sky starting mid-November. On its website you can find a PDF map to explore the lighted streets of Stockholm and not miss a single of the Christmas decorations on the streets of the city (a tip: the lighted elk are usually one of the most beloved and photographed. Look for them on the map). You cannot leave Stockholm in December without trying the julbord – the Swedish Christmas buffet – that you will only be able to enjoy during this month. Swedes usually eat it at noon and consists of a mix of hot and cold dishes including marinated herring, salmon, cod, sausages, meatballs and the julskinka – a leg of cooked ham marinated in mustard – gingerbread and spiced wine are the essential basis of any good Christmas menu in Sweden. It is also accompanied by hard liquor called schnapps.

In many restaurants in Stockholm the Christmas buffet is only offered in December but some also do during the last week of November.

Some restaurants to try the julbord:

Or so they say … that possibly the 38-meter-tall tree located at Skeppsbrokajen, in the part of Gamla Stan located opposite the island of Skeppsholmen and the ship Af Chapman, is the largest in the world.

Going for a walk through Gamla Stan like a Swede includes stopping to have a fika in some of the best-known coffee shops such as Chockladkoppen. Do not forget to try my recommended cardamom buns in Stockholm. And if you want to live the spirit of Swedish Christmas you can take a guided tour where they will explain how the Swedes celebrate Christmas and the origin and customs of their different traditions such as the julbord or the julgrann, the candles in the candelabra next to the windows, etc.

If you would like to see the beauty of Christmas decorations in Stockholm take our Stockholm Private Walking Tour. When taking the tour in December your private tour guide will give you a good overview of Swedish Christmas traditions during the tour.

Not only in the markets of Stockholm you will find objects to decorate your house but also in the department stores of the city you will find the most sought-after gifts.

Of all the places in Stockholm, the department stores of Nordiska Kompaniet (NK), located next to Kungsträdgården and founded more than a 100 years ago, are the ones that attract more Swedes and tourists. Its tastefully decorated shopwindows, the large selection of high-end stores and the atmosphere that is breathed inside make it one of the most appealing. Yes, prepare your wallet because it is not cheap.

Remember also that on 24th all stores close earlier and that December 25th and 26th are bank holidays. Between the 27th and the 31st of December you will find the end-of-year sales called mellandagsrea in Swedish.

Look For the Best Views of Stockholm

Take advantage of the few hours of light and look for a place with panoramic views of Stockholm* like the hill at Skinnarviskberget on the island of Södermalm (in the link you find 10 + 8 places!) especially if the city is full of snow and enjoy watching a sunset, or how the city shines with the lights reflecting on the white mantle that covers it.

In Spain New Year is all about grapes. In Sweden, forget the grapes. The toasting with champagne is carried out when the clock ticks and New Year’s Eve is celebrated with fireworks. Many Swedes spend New Year’s Eve at private or public parties with friends and in Stockholm they usually go to a higher place to see the fireworks that are launched from Skeppsholmen. If you decide to spend the end of the year at a party you have many to choose from. Read this article to know the best places to celebrate New Year’s Eve in Stockholm.

If you come to Stockholm in December and wish to have a wonderful local tour guide, book your Stockholm tour here: Stockholm Private Tours.

The highlight of the tour is a visit to the City Hall and its famous Blue Hall, where the Nobel Prize banquet is held. Our tour begins with a panoramic ...
END_OF_DOCUMENT_TOKEN_TO_BE_REPLACED
Most Popular

The architecturally and historically rich city of Stockholm is spread out over 14 islands, yet still small enough to enjoy fully in a matter of hours. Our ...
END_OF_DOCUMENT_TOKEN_TO_BE_REPLACED
Most Popular

In addition to the Old Town we will visit the fascinating Vasa Ship Museum and see historic Sweden in miniature at the Skansen Outdoor Museum. We start with a panoramic drive ...
END_OF_DOCUMENT_TOKEN_TO_BE_REPLACED
Most Popular

Starting your day from Nynashamn port in the comfort of your private vehicle is a perfect way to begin a day of splendid Stockholm sightseeing. The Swedish capital ...
END_OF_DOCUMENT_TOKEN_TO_BE_REPLACED